Cocaine is a highly addictive central nervous system (CNS) stimulant that produces pleasurable feelings of euphoria, confidence, alertness, and energy, but, also produces a great deal of adverse effects as well. No one sets out to become addicted to cocaine and few want to think they might be until they lose total control, but, from the very first dose, the possibility exists and no matter how much willpower and confidence you have in yourself, cocaine has the power to change it. The sooner you recognize the signs you need cocaine addiction rehab, the less suffering you and your loved ones will have to go through.

Viewing Cocaine Addiction as a Disease

Cocaine addiction is viewed as a brain disease treatable like many other chronic diseases such as diabetes or high blood pressure. Cocaine produces dopamine, a neurotransmitter that regulates rewards and motivations, but, it also blocks dopamine reuptakes leading to higher amounts accumulated in the brain that gives it its power for euphoria and reinforced motivations to use the drug again.

According to the Scripps Research Institute, addiction’s “residual deviation from normal brain emotional regulation (i.e., the allostatic state) is fueled by numerous neurobiological changes, including decreased function of reward circuits, loss of executive control, facilitation of stimulus–response associations, and notably recruitment of the brain stress systems.” These conditions evolve like any other chronic disease conditions would, if left untreated and continuously exposed to negative influences, but, help is available and the following, are 10 signs you need cocaine addiction rehab. For help finding treatment call 800-895-1695 toll free anytime.

1.) Your Mind Becomes Preoccupied with Cocaine Use 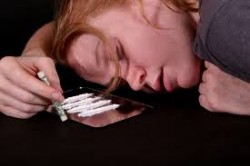 Cocaine addiction can lead to psychosis, depression, and death by overdose. Get help before it’s too late.

When you feel like you can’t get away from the cravings for cocaine and your mind becomes preoccupied with its desirable effects, these are signs you need cocaine addiction rehab. The more often you use cocaine and the more experiences you encounter, the more reminders of use your brain will retain as conditioned reinforcements to use cocaine again.

2.) Compulsive Use, Despite Negative Consequences

Addiction is a process that goes from impulsive and occasional use for the pleasurable effects of a drug to the compulsive and uncontrollable use, despite the negative consequences. You may get to the point where you don’t even like the way you feel when your intoxicated on cocaine, but, you use it anyway, with total disregard for the harm you know it is causing.

People are different. Their physiological chemistries and reactions to cocaine are different and the accumulated adaptations within them will never be the same as somebody else’s which is why some people experience paranoia, hallucinations, or other psychotic behaviors when they use cocaine.

Tactile hallucinations referred to as “coke bugs” often lead people to mutilations of their face and other skin areas which can lead to infections and long term appearance damages. Panic attacks can lead to dangerous physical health conditions such as a heart attack or stroke and bizarre behaviors can be life-threatening to both the user and those around them.

Tolerance is an aspect of cocaine addiction where the user must continuously use more of the cocaine to elicit the desired effects. Unlike many other drugs, however, there is a grave possibility that you may become sensitized to the cocaine, with chronic and high doses of the drug, developing what’s known as a reverse tolerance. Once you experience a cocaine psychosis you become vulnerable to repeat occurrences of the psychosis with greater intensity and durations each time you use and with increasingly lesser doses.

We can help you find treatment for cocaine addiction. Call 800-895-1695 toll free anytime.

Repeated attempts to quit using cocaine are signs you need cocaine rehab which can help you cope with your cravings and learn strategies you’ll need to avoid and prevent relapse “triggers”. According to the SAMHSA “Cues–any stimuli (substance-using friends, locations, paraphernalia, moods) repeatedly paired with substance use over the course of a client’s addiction–can become so strongly associated with the substance’s effects that the associated (conditioned) stimuli can later trigger arousal and an intense desire for the substance and lead to relapse.”

What many people don’t realize about cocaine is that it deteriorates the way the brain is able to manage stress and over time, they become unable to regulate their emotions leading to increased anxiety, depression, aggression, drastic mood swings, suicidal ideations, and more. Detox alone is insufficient in helping you to regain control and abstinence is hard to accomplish for any long term without help.

7.) Using Cocaine to Fulfill other Needs in Your Life

Cocaine can produce a sense of confidence, energy, or empowerment that becomes elusive the more often it is used and trying to regain those senses by using cocaine over and over again is a sign you need cocaine addiction rehab. Learning how to restructure your life without using cocaine and overcoming those desires with healthier and more positive means will be difficult, but, with counseling and other supportive services it is possible. Call 800-895-1695 toll free for help finding treatment.

8.) Using Cocaine, Despite Impairment to Health

Cocaine addicts tend to disregard their basic needs such as food, shelter, hygiene, or sleep and despite deteriorated health, they often, do not seek appropriate medical attention when needed. These are signs you need cocaine rehab where the issues can be addressed to improve your recovery outcome.

9.) Changing Behaviors to be Able to Use Cocaine

Isolation, withdrawal from family and friends, hanging out with fellow cocaine users, disregarding things you once enjoyed, and spending most of your time and money to use cocaine are behavioral signs you need cocaine addiction rehab. The program will help you identify problematic areas of your life and change them for the better.

10.) Committing Dangerous or Immoral Acts to Use Cocaine

If you are using cocaine intravenously, with other substances, or committing acts like prostitution, theft, or violence to obtain and use cocaine, you need cocaine addiction rehab. The consequences, otherwise, can be detrimental to your freedom, health, and those you care about most.