Drug addiction can be a debilitating condition that stays with a person for years to come. Likewise, mental health problems, such as depression and anxiety disorders can follow a person for decades on end. According to the National Institute on Drug Abuse, the risk of developing an addiction to drugs increases considerably for people suffering from psychological problems.

The 2012 National Survey on Drug Use and Health show an estimated 8.4 million Americans suffer from both substance abuse and psychological disorders. Of this number, only 7.9 percent receive adequate treatment for both conditions while 53.7 percent fail to seek out treatment for either condition. The combined effects of both conditions require a specialized treatment approach. Without proper treatment, those affected will likely develop more serious problems over time.

Dual Diagnosis Conditions – Which Causes Which? 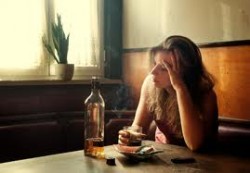 People who struggle with depression and anxiety are statistically at a higher risk to develop substance use disorders than others.

Dual diagnosis conditions involve the co-occurrence of a mental disorder and a substance abuse problem. In effect, dual diagnosis conditions act as two interacting brain diseases, according to the University of Utah. While chronic drug abuse habits can cause mental illness to develop, addiction most definitely worsens the symptoms of an resulting, as well as an existing, mental disorder.

On the flipside, people experiencing symptoms of a mental condition, such as anxiety or depression may start abusing drugs in an attempt to self-medicate distressing symptoms. As drug addiction and mental illness both carry their own sets of symptoms, symptoms from one condition can easily aggravate the symptoms of the other condition.

It’s not uncommon for certain interrelated factors to contribute to the development of co-occurring conditions involving drug addiction and mental illness. Interrelated factors may entail circumstantial influences, genetic predispositions as well as similarities between the symptoms associated with each condition.

Feelings of inadequacy and discontent often lead teenagers to experiment with drugs. In cases where a teen suffers from an underlying psychological disorder, ongoing drug use will quickly bring these underlying symptoms to the surface. For people with depression, the presence of an underactive brain-reward pathway may drive a person to turn to drugs as a way to stimulate pathway activity.

As certain drugs like methamphetamine can cause users to experience hallucinations, these types of experiences may be early indicators of an existing or developing mental disorder.

According to a January 2014 report from the National Institute on Drug Abuse (NIDA), people affected by severe mental conditions, such as bipolar and schizophrenia disorders have an exceptionally high risk of developing drug addiction problems.

Identifying any existing mental disorders is imperative to properly treating drug addiction in people struggling with dual diagnosis conditions. Treating only one or the other leaves a person vulnerable to the symptoms of the untreated disorder, which all but diminishes any attempts at treatment as a whole.

As drug addiction and mental illness tend to feed off one another, when left untreated, both conditions are likely to increase in severity as brain functions continue to deteriorate over time.