You didn’t start using OxyContin with the intention of becoming addicted. You might have started taking it because it was prescribed, or because a friend or family member gave you some of their prescription for your pain. Maybe you actually began with recreational use because the people in your social circle were doing it.

Using it makes sense because it gives you the high of heroin and it comes from a regulated source, so it feels safe. An OxyContin high is appealing and it can cause users to up the amount they take to maintain that high. Increasing a prescribed dosage, let alone a recreational one is dangerous.

If you have been increasing the amount of OxyContin that you are taking because you have developed a tolerance and need to use more and more, you are probably beginning to worry about the possibility of overdose, and you should be.

News are full of information about the US opioid epidemic and this includes OxyContin. The U.S. Department of Health & Human Services (HSS) reports every day, 44 Americans die from an overdose of prescription drugs, like Oxy. You don’t want to be one of those people, but you could be.

Yes, OxyContin overdose can kill you. If it doesn’t, you aren’t safe and sound. You run the risk of developing brain damage and other life altering health changes.

To avoid these negative consequences, you need treatment. But, that can feels easier said than done. What you need is help. DrugAddiction.org can answer your questions, help you understand funding the treatment, and recommend some quality treatment programs that will work for your situation. You know that you need to quit, let us help you do something about it. Call 800-895-1695 (Who Answers?) now.

Ultimately, if you worry about overdose, you need to stop abusing OxyContin. However, knowing the symptoms of overdose is also a good thing. Should you continue using while you research treatment, relapse, or be present for an overdose, knowing these symptoms could help you save a life, maybe your own. 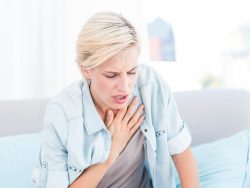 OxyContin overdose can make it difficult to breath.

The US National Library of Medicine identifies the following signs of overdose. Because OxyContin is a respiratory depressant, it slows your breathing. You will notice that many of the symptoms of overdose are related to a lack of oxygen in your system.

If you show any of these signs after using OxyContin, you need immediate medical attention.

Once you reach an emergency medical setting, the staff will begin treating the overdose, provided you are still alive.

The US National Library of Medicine asks readers to prepare for the following when being treated for an overdose:

If you took the OxyContin with other drugs or alcohol, you may require additional treatments, as your situation will be more dangerous.

The Centers for Disease Control and Prevention (CDC) gathered the following information about people who died from prescription opiate overdose from 1999 to 2014.

However, if you do not fall into one of these groups, it does not mean you are safe.

Is an OxyContin overdose deadly? Yes; it can be.