Percocet is a brand name for a medication that combines oxycodone with acetaminophen to relieve moderate to severe pain. In medicine, physicians prefer to prescribe Percocet for individuals who have no history of substance abuse, liver or kidney disease, or have been diagnosed with thyroid problems or seizures. The opioid analgesic, oxycodone, is further enhanced by the pain relieving effects of acetaminophen and that allows for less intake of the opioid substance while achieving the desired pain relieving effects. The problem with Percocet is that it has a high potential for abuse and dependency because of the active ingredient of oxycodone.

Oxycodone is a semi-synthetic, or partially, man-made opioid processed from thebaine, a psychoactive chemical which naturally occurs in the opium poppy, (Papaver somniferum). On its own, it is highly addictive and as a component of Percocet, it is the reason that physical dependency develops and causes the person to suffer withdrawal symptoms when they suddenly, reduce or stop using the drug. According to the Center for Substance Abuse Research, “Currently, oxycodone products, and all of the medications containing it, are Schedule II controlled substances.” 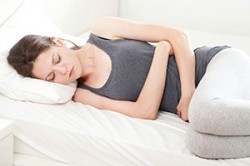 The symptoms of Percocet withdrawal may feel like the flu.

Percocet is en effective pain relief medication when used under the supervision of a qualified physician and as prescribed, but, even in those circumstances, physical dependency to Percocet can occur in just a few days. The oxycodone content in Percocet changes in the way brain functions because it is an opioid that binds to certain receptors in the brain to block the pain. When the person takes Percocet for a few days, the receptors become adapted to the drug and the increased dopamine it produces. This dopamine is what gives the body its sense of reward and pleasure and that is why Percocet makes people “high”. After a while, the body begins to rely on the opioid in Percocet to function and without it, signals of miscommunication result in withdrawals.

Percocet withdrawal symptoms are much like having the flu and last around 3-5 days. The person may experience agitation, nausea, vomiting, diarrhea, fever, chills, runny nose, teary eyes, yawning, weakness, and dilated pupils. The more often Percocet is used, and the greater the dosage amounts, the more withdrawal symptoms the person might experience. In these cases, the person may have intense cravings for Percocet, increased respiratory rates, abdominal cramps, muscle aches, muscle spasms, bone pain, tachycardia (rapid heartbeat), or hypertension (abnormally high blood pressure). In chronic cases, where the person has become addicted to the oxycodone opioid, withdrawal symptoms can be serious and life threatening.