Crystal meth, also known as methamphetamine, gets its name from the crystallized texture of the drug once it’s cooked and prepared. Much like cocaine, crystal meth acts as a powerful central nervous system stimulant capable of causing considerable damage to brain and body functions. People who’ve used crystal meth for a long time no doubt live with the effects of the drug every day.

Compared to cocaine’s effects, crystal meth can cause significantly more damage because of the way it interferes with dopamine neurotransmitter functions in the brain, according to the National Institute on Drug Abuse. Whereas cocaine prevents brain cells from reabsorbing or recycling dopamine chemicals, crystal meth increases dopamine brain cell secretions while at the same time blocking its reabsorbing. These combined effects create a toxic chemical environment within the brain that gradually deteriorates brain cell structures. 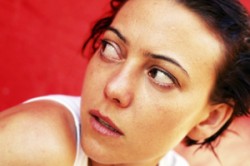 Paranoia and mood swings are some of the possible signs of meth abuse and addiction.

Crystal meth effects can persist for as long as 26 hours after using. During this time, a person’s pupils will remain dilated. Some users may wear sunglasses on a regular basis in an effort to hide this symptom.

The harsh chemicals used to manufacture meth come out through a person’s pores, especially when he or she sweats. This smell closely resembles that of cat urine giving regular meth users a distinctive body odor.

Crystal meth addiction tends to dry out the skin and cause persistent itching. This itching often covers the whole body. Users may scratch to the point where sores start to appear on skin surfaces.

A crystal meth addiction all but eliminates a person’s appetite for food causing drastic weight loss within a short period of time.

Repetitive behaviors can take the form of doing the same task several times, excessive exercise routines or taking things apart and putting them back together again.

Crystal meth’s stimulant effects create an energy surge that’s easily seen in a person’s inability to sit still or remain in one place for any length of time. Hyperactive behavior displays can also become violent at times.

Eye twitches or tics are a common symptom of meth addiction. Addicts have no control over eye twitching, a symptom that continues for as long as they keep using.