Understanding the Physical Effects of Methamphetamine Use

Methamphetamine, also called a bathtub drug because it is often produced in clandestine labs around the country, is an addictive stimulant that has swept the nation causing widespread alarm for those involved. The physical effects of methamphetamine use are characterized by dramatic behavioral changes, rapid decline in appearance, and reduced motor skills & learning abilities.

Methamphetamine use often causes distinct behavioral changes which occur as a result of the chemical changes that occur within the brain when the drug is used. Such changes in behavior may include greater aggressiveness, paranoia, anxiety and fear. People who abuse this drug are more likely to take part in risky activities, they are more impulsive and often get into trouble with the law as a result of their addiction and the decisions that they make. 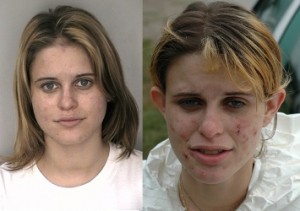 Meth causes serious physical damage inside and out.

Methamphetamine is known to cause distinct changes in personal appearance. “Meth mouth” a term used to describe the rapid decay of the user’s teeth is a common term when talking about methamphetamine addiction. Users often pick at their skin because they have constant crawling sensations as if there are bugs under the skin. To further increase the appearance changes that occur from methamphetamine use, the toxins that are found in the drug often cause infections and boils to occur on the user’s skin.

Methamphetamine use causes changes in the chemical components of the brain and this can cause changes in cognitive function. Reduced motor skills and an inability to properly talk, walk or perform other motor functions are all likely outcomes for a user who is abusing crystal meth regularly.

According to the National Institute on Drug Abuse, methamphetamine use has been found to cause serious structural changes in the brain in areas that are associated with cognitive function. People who abuse methamphetamine repeatedly or for a prolonged period of time are at risk of suffering from permanent damage to the areas of the brain that are responsible for cognitive function and may have trouble remembering things or learning new things.