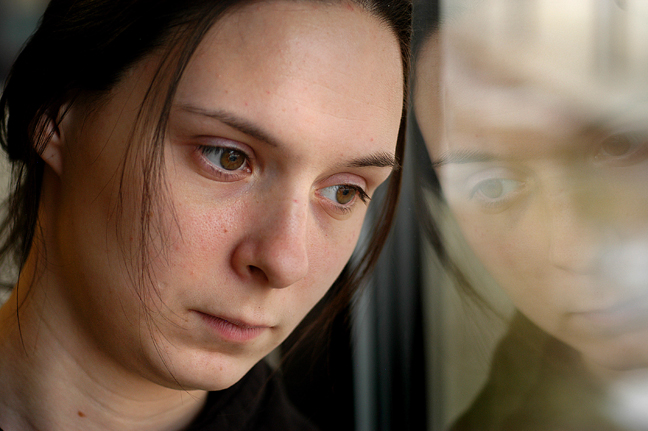 Kelsey Carroll near a glass door at Somersworth, NH, High School. Kelsey is featured in the film Who Cares About Kelsey? by Producer/Director Dan Habib. Film synopsis: Kelsey Carroll has one goalÊÑÊto graduate from high schoolÊÑÊand plenty of reasons why she shouldn’t.ÊShe attends a school with one of the highest dropout rates in New Hampshire and has dealt with homelessness,Êself-mutilation, and ADHD. As a freshman, she didn’t earn a single academic credit, but she did get suspended for dealing drugs.ÊDuring KelseyÕs sophomore year, a new school principal implemented PBIS and a youth-directed planning process called RENEW to improve the schoolÕs culture and reduce the dropout rate. ÊThis school-wide overhaul gave Kelsey a chance at a different outcome.ÊÊWho Cares About Kelsey?Êis the story of Kelsey’s transformation from a defiant ‘problem student’ to a motivated, self-confident young woman. Critical figures in her life shape her coming of age and play important roles in an education revolution that’s about empowering ÑÊnot overpoweringÊÊÑÊour most emotionally and behaviorally challenged youth.