One of the most difficult and dangerous drugs available on the street today is heroin. This drug causes serious problems legally, financially, spiritually, emotionally and otherwise. Everyone who is involved with heroin and with the heroin addict is affected negatively by the use of this drug. Heroin is so highly addictive, it has been given the name “killer” by many because the adverse reactions that come from the physical dependence on the drug are so difficult to get past that many users remain addicted for years and years.

What is Heroin Addiction?

Heroin addiction is a physical dependence that forms after a single use of the drug. Prolonged use or multiple uses of heroin can lead to physical dependence that causes the addict to essentially feel like they “have” to have the drug in order to survive. Unlike many other substances that cause addiction, heroin is a highly physically addictive drug that comes with many, many withdrawal effects if they drug is abruptly stopped or the dosage is lowered.

Some of the withdrawal symptoms associated with heroin addiction include: 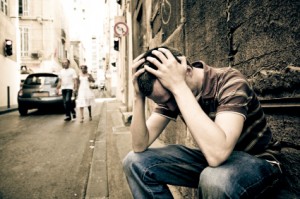 A heroin addiction can be difficult to overcome alone.

These symptoms will progress for a period of up to two weeks following the last dose of heroin and in some cases can become rather severe. For those who abuse heroin for a very long time, the withdrawal symptoms can become so severe that there is a near immediate need for medical treatment. In fact, heroin is one of the few drugs that, when no longer used, can lead to adverse withdrawal symptoms that pose a significant risk to the user.

People who abuse heroin are at an increased risk of a number of different health concerns and problems. Many of these medical problems are lifelong and will stick with the heroin addict long after they have received treatment for their addiction. Some of the most dangerous consequences of heroin abuse or addiction include:

Heroin addiction often leads the user to taking part in risky behaviors that can lead to adverse consequences. Because most heroin users inject the drug and tend to take part in sharing needles, the risk of infection and disease is significantly higher for those who shoot heroin than for many other types of drugs. In some cases, the injection site can become infected and this can lead to boils, skin infections, staff infections and even the potential loss of a limb if left untreated.

For those who abuse heroin and believe that there is no hope, help is available through treatment and rehabilitation programs. Although recovery from heroin addiction is a long, difficult and challenging journey, thousands of people are able to overcome heroin addiction and live happily without the use of this deadly drug. Rehab centers provide medications to help with withdrawal symptoms, counseling to assist with psychological dependence and a range of other therapeutic services to help patients cope with every facet of their addiction as well as to heal on an emotional, physical and spiritual standpoint.