Prescription medication bottles frequently warn against the use of alcohol or other medications when taking certain drugs but despite these warnings, thousands of users do not heed the advice of the drug manufacturers or of the doctors who prescribed the drugs. Unfortunately, millions of people do not take the risks that are associated with certain deadly drug combinations seriously enough. In fact, very few people even think about the prescription medications as drugs and those who do, are reluctant to care about the way that these drugs may interact with other substances or drugs. As a result, thousands of overdoses and deaths take place each year and many could be prevented.

Alcohol is well known to interact in a negative way with prescription drugs and although it is one of the most dangerous combinations, there are many other life-threatening combinations that take place with other combinations of drugs, substances or foods paired with medications. Yes, that’s right, deadly combinations of medication and food can and DO occur every year! 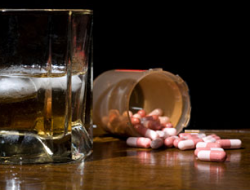 Here’s a few of the most dangerous drug combinations that have caused an increase in hospitalization, overdose and even death in patients over the past few years: