Vicodin, which combines hydrocodone and acetaminophen, is the most prescribed opioid painkiller in the United. It can work well when used as directed, but the medication is also addictive. Exact numbers for how many people use Vicodin in ways that impair their ability to live normally and put their lives at risk from overdoses do not exist. What is known, however, is that more than 2 million Americans abuse prescription pain medications each year and some proportion of them will develop an addiction. Heroin, which produces effects similar to Vicodin, has an addiction rate as high as 25 percent.

Effective treatment for Vicodin addiction combines medications, counseling and support from friends and family members. This article focuses specifically on the drug component of such treatments. More comprehensive information is available from the U.S. government’s Substance Abuse and Mental Health Services Administration.

Taking too much Vicodin can lead you into unconsciousness and stop your breathing. When that happens, having an another person inject you with naloxone can save your life. Longer-term infusions of naloxone may be needed if you have taken large amounts of Vicodin. 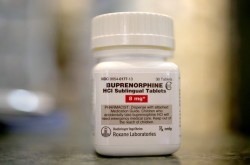 Buprenorphine is a medication that is often used in the treatment of opiate addictions.

Popularly known by the discontinued brand name Narcan, naloxone rapidly reverses the narcotic effects of Vicodin by blocking the chemical receptors to which the opioid binds. It works quickly, but it also can also cause the sudden onset of withdrawal symptoms. Even though some states have authorized pharmacies to sell naloxone injections kits without a prescription, you must seek medical attention whenever you receive a shot of naloxone.

Vicodin withdrawal is often unpleasant and difficult to watch. Several medications are available to relieve the anxiety, muscle spasms, sweating, body aches and cramping experienced during detoxification, but anywhere from a few days to several weeks will be needed for all the Vicodin to leave your system.

Two drugs often used during Vicodin withdrawal are clonidine and loperamide. Clonidine, which is primarily a high blood pressure drug, makes you less anxious and jittery. Loperamide is the active ingredient in over-the-counter antinausea and antidirarrheal products like Kaopectate A-D and Immodium A-D.

Available as a generic tablet and under the brand-name Reviva, naltrexone can help you stop using Vicodin by preventing the painkiller from having any effect. Naltrexone, like naloxone, blocks opioid receptors.

You have to complete Vicodin withdrawal before starting on naltrexone, and you must consult closely with your doctor and pharmacist regarding the treatment’s effectiveness and any problems it causes. Dangerous potential side effects include extreme vomiting and diarrhea, hallucinations and confusion.

Most often prescribed as the brand-name medication Suboxone, a tablet that combines buprenorphine with naloxone reduces Vicodin cravings by producing some of the euphoric effects of the painkiller while also preventing respiratory suppression and cloudy thinking.

Almost daily visits with a doctor are needed when first starting buprenorphine therapy. The medication must be initiated separately and at a low dose once the most-severe withdrawal symptoms have abated. After doses get increased to a therapeutic level, the naloxone combination can be introduced. Side effects that may require emergency treatment and discontinuation of buprenorphine include breathing difficulties, rash, jaundice, bleeding under the skin, sharp stomach pain and sudden flu-like symptoms such as lack of energy.

Usually considered a replacement therapy for heroin addiction, methadone can also help you stop using Vicodin. The medication mimics the chemical effects of the opioid painkiller without producing a high. When taken at higher-than-prescribed doses, however, methadone can suppress lung function and induce unconsciousness. Since every pharmacy does not have authorization to dispense and monitor methadone treatment, it is used less frequently than naltrexone or buprenorphine to treat opioid addiction.

Like all drug and alcohol recoveries, Vicodin rehab never truly ends. You may end up taking naltrexone, buprenorphine or methadone for several years.