Is there Rehab for Ecstasy Addiction?

Although ecstasy is not as commonly heard of for addiction, ecstasy addition does occur and just like any drug, it can be extremely hard for a person to quit taking once their body has become used to the drug.

Ecstasy is actually MDMA which is short for 3,4-methylenedioxymethamphetamine. Ecstasy, unlike the majority of drugs, is manmade and not derived from a plant; therefore there are many different methods to make ecstasy and various types of the drug are out there on the streets.

Ecstasy is known as a club drug because the majority of people who use it tend to stay up all night, especially at clubs, because the drug increases a person’s energy. Ecstasy is a stimulant drug like, cocaine, amphetamine and methamphetamine.

When ecstasy is taken, usually in an oral form, a person will begin to feel its effects within the first fifteen minutes of use. Ecstasy effects the brain and increases serotonin which causes a person to feel more happy, friendly, trusting, as well as more stimulated and warm towards others; it is common for people to touch other people while on ecstasy due to the intense sensation they feel, this is why ecstasy is typically taken at clubs so people can dance with one another. 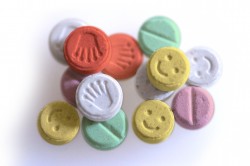 You do have treatment options for your ecstasy addiction!

For starters, not all people experience the same feeling when on ecstasy and some people a have a bad reaction to the drug which typically leads them to the hospital.

People who take ecstasy may feel a heightened rush of euphoria but the drug’s effects cause a great deal of harm to a person’s body especially when the drug is taken frequently by a person. Ecstasy can lead to a condition called hyperthermia which is basically a person’s body overheating. Hyperthermia can lead to organ malfunctioning such as heart and kidney failure.

According to www.drugabuse.gov, high levels of the drug in the blood stream can increase the risk of seizures and affect the heart’s ability to maintain its normal rhythms. In addition, ecstasy also causes a person’s heart rate to increase which can potentially lead to heart problems.

Ecstasy addiction can control a person’s life and cause severe internal damage to a person’s body. If a person is hooked on ecstasy they may want to consider checking themselves into an ecstasy rehab. There are not many rehabs that are specifically geared towards ecstasy addiction, but there are a multitude of rehabs that are created to help people with all types of drug addictions. Being that ecstasy is a stimulant drug with similar effects of crystal meth or cocaine, if a person does not have an ecstasy rehab located near them they could always join one that focuses on these types of drugs.

Moreover, there are numerous drug abuse hotlines that a person can call to receive help and information about their ecstasy addiction and there are outpatient rehabs that people can join if they do not wish to get help at an inpatient rehab.