Understanding the Signs of Hydrocodone Addiction

Failure to Adhere to Personal Responsibilities

According to Norris Cotton Cancer Center, hydrocodone can be habit forming. When a habit forms, most people will begin to exhibit signs that they are neglecting responsibilities in order to use more drugs, obtain the drug or otherwise be under the influence. If notice that someone you love is no longer caring for his or her children, performing household chores, attending work or school, or is otherwise neglecting responsibilities, drug use may be to blame. 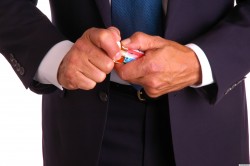 If you cannot stop taking the drug you may be addicted to hydrocodone.

As drug use persists, the signs of hydrocodone addiction may become easier to spot. You may notice that a user no longer combs his hair or brushes his teeth, you may notice that they wear the same clothing for days at a time or that they are otherwise not in control of their personal hygiene. Addiction will rip away any control that a user has leading to lapses in reason and can cause a user to opt away from things that don’t involve drug use.

Hydrocodone addiction often leads to intravenous drug use. When this happens, the user is at risk of a number of potential diseases and infections including:

Infections often come from shared needles or dirty needles but they can also be the result of dirty living conditions, poor hygiene, or other matters.

Do you take Hydrocodone for a legitimate purpose but despite your desire to only take the medication as prescribed, you find that you always take more than intended. One of the signs of hydrocodone addiction that both users and outsiders can sometimes spot is the uncontrollable drug use. As a user, you may say “I’m only going to take x-amount today,” but then you end up taking double, triple or more than the intended amount. As an outsider, you can recognize misuse in someone you love if they are prescribed the medication and their prescription always seems to run out before the refill date. Both are sure signs that there is a problem at hand.

Have you tried to quit using hydrocodone in the past? Have you made an honest attempt to quit, promised that you would, and maybe even asked for help? If you have tried to quit using, but you continue to relapse and fall back into your old habits of drug use, hydrocodone addiction is likely to blame. Failed attempts to quit will only make later attempts even more difficult.

Have you found pill bottles, syringes, straws or other drug using devices in the belongings of someone you love? If you’ve found any type of drug paraphernalia in the home of a loved one or in their belongings, addiction is likely a culprit.

One of the most prominent signs of hydrocodone addiction is felt by the user—cravings for the drug and withdrawal when the drug is not used. These feelings can make continued use of the drug seem like the only way to stop the burden of the cravings and the illness associated with withdrawal, but there are other forms of help!