Percocet, one of many opiate-based drugs, acts as a powerful pain reliever, with a time-release mechanism that holds pain symptoms at bay for up to 12 hours. While Percocet can be invaluable in cases where moderate to severe pain symptoms make life unbearable, the long-term use of this drug can bring about an even bigger addiction problem over time.

Anyone who’s used Percocet and not followed prescription guidelines likely has a good idea of the negative effects that come with overuse. Like many other types of prescription opiates, the abuse of this drug can quickly drive a person to the point where Percocet rehab becomes necessary.

The need for Percocet rehab stems from one very powerful ingredient contained in Percocet, known as oxycodone, according to Bryn Mawr College. In effect, oxycodone’s strength as a pain-reliever produces effects comparable to morphine. Oxycodone coupled with acetaminophen, a secondary non-opiate ingredient, makes for an even more addictive compound than just oxycodone alone. 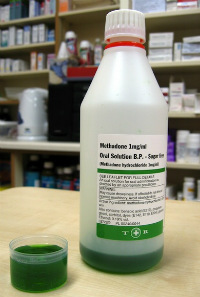 Replacement medications such as methadone may be used in the treatment process.

As one of the more potent opiate drugs, Percocet’s addictive effects move at a faster rate when compared to a drug like codeine, a milder opiate. According to the University of Maryland, the effects of opiates prevent pain signals from reaching the brain by interfering with the body’s nerve signal transmission processes.

These interactions result from the release of neurotransmitter chemicals housed within the brain, central nervous system and gastrointestinal tract. Once Percocet enters the brain, it targets specific groups of brain cell receptor sites and activates the release of neurotransmitters in large amounts. These same chemical interactions take place within the central nervous system and gastrointestinal tract.

When is Medication Treatment Needed?

Brain cell cites undergo considerable structural damage with ongoing Percocet abuse as sites are forced to secrete abnormally large amounts of neurotransmitters on a frequent basis. This damage all but incapacitates cell functions over time and makes the brain dependent on Percocet’s effects.

People with long histories of drug abuse will experience the worse of this damage in the form of severe withdrawal effects and extreme, ongoing drug cravings. In this state, some form of medical treatment is needed to help addicts overcome the incredible withdrawal effects experienced during Percocet rehab detox. Even after detox ends, withdrawal aftereffects can linger for years into the recovery process.

First and foremost, Percocet rehab programs attempt to manage withdrawal symptoms in any form, whether as a part of detox treatment or in the case of long-term treatment purposes. Even in cases of mild to moderate addiction, withdrawal effects can be quite uncomfortable and distressing.

Standard symptom management protocols work to alleviate discomfort brought on by the types of withdrawal effects everyone experiences, such as –

To help relieve these symptoms types, Percocet rehab may administer common, everyday over-the-counter treatments, some of which include –

Under these conditions, the severity of withdrawal effects poses a considerable risk of relapse and continued drug use. In effect, medication replacement therapies support damaged brain cells by mimicking the effects of Percocet, according to the National Institute on Drug Abuse. In the process, a person experiences considerable relief from withdrawal effects. Medication therapies can be used for detox purposes as well as for long-term maintenance purposes.

Replacement therapies commonly use in Percocet rehab include –

For people with a history of going in and out of drug treatment, the likelihood of relapse runs considerably higher than for someone entering treatment for the first time. Percocet rehab programs use aversion-based medication therapies to help lower the risk of resumed drug use.

Aversion-based medications work by blocking the brain cell receptor sites that interact with Percocet, or any other type of opiate for that matter. In the event of relapse, these medications prevent a person from experiencing any “high” effect from the drug.

Medications of this type used in Percocet rehab include –

The withdrawal and drug cravings effects left behind by Percocet addiction accounts for the high rate of relapse associated with Percocet abuse. Medication treatments offer a necessary form of medical care in light of the physical damage done to the brain and central nervous system. While medication treatments may not benefit everyone, those who do need the extra help have a much better chance at long-term abstinence from drug use.